On October 20, 2017, I had the incredible honour to be invited to watch a friend and fellow official receive the recognition he deserved for his remarkable officiating career. Not only was I able to witness some amazing officials, coaches, players, trainers and managers receive awards in their respective sports, but also spend an evening with some of the bravest men and women that Canada has.

Major (Retired) Ron Stakes served as an Air Traffic Controller for the Royal Canadian Air Force before his retirement last year and is one of the finest men that I have ever met. I was beyond thrilled to hear that he was being named to the Honour Roll at the 29th Annual Canadian Armed Forces Sports Award Ceremony. I met Ron nearly twenty years ago when I was invited to be a guest instructor at the Canadian Forces Officiating School held at CFB Borden, and worked beside him for many years after that at the school. During my years there, I formed many friendships with some of the most dedicated men and women that I have ever known. The NHLOA has had a long relationship with the CF School. Current and retired members have instructed or spoken at it, including Dan Marouelli, Scott Driscoll and Lance Roberts. 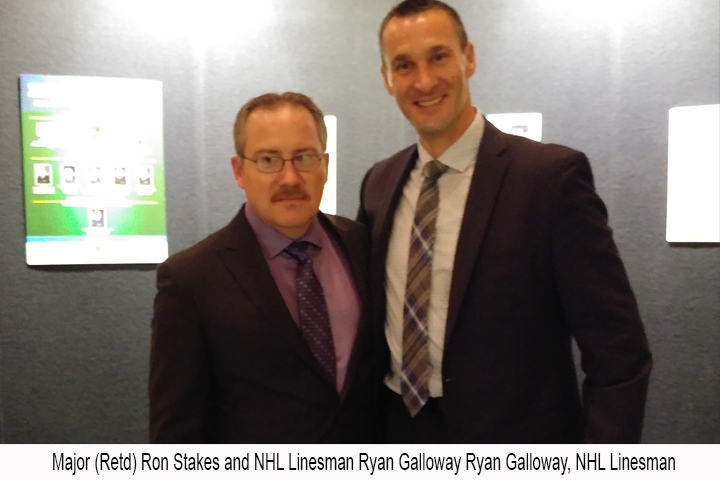 It was a wonderful dinner and ceremony at the Canadian Aviation and Space Museum in Ottawa, Canada. The event was held in the main hall of the museum, where we sat surrounded by aircraft from every era. A military ensemble played music throughout dinner, and I was in awe seeing all the military members dressed in full uniform. In attendance with Ron was his incredibly supportive and proud wife, Julie. I was humbled and honoured to be introduced to and spend a few minutes speaking with General Jonathan Vance, the Chief of the Defence Staff. Thank you, sir, for taking the time to speak with me and for your exceptional leadership. 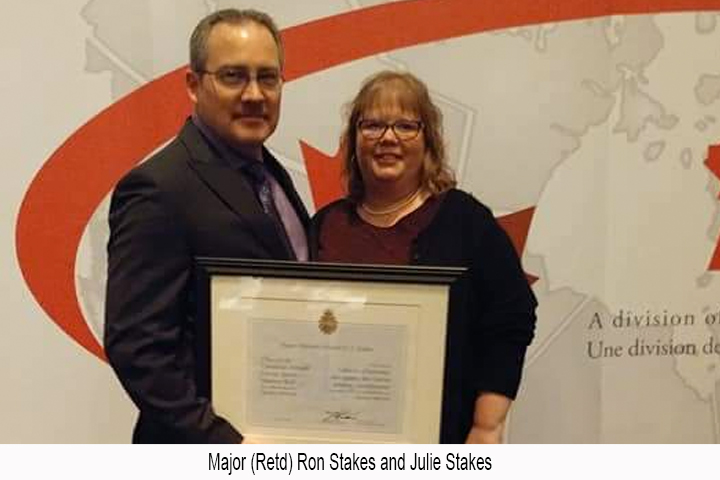 Taken from the Awards Program:

Maj (Retd) Stakes was one of the most respected and dedicated officials in the CAF for over 25 years. An avid hockey player when he joined, Maj (Retd) Stakes soon shifted his focus to officiating. He quickly moved up the ranks, becoming a Hockey Canada Level 5 accredited referee and Master Course Conductor. Over the course of his accomplished career, Maj (Retd) Stakes officiated an impressive 20 CAF Regional Hockey and Ball Hockey Championships, and nice CAF National Hockey and Ball Hockey Championships, including four championship games. He was selected to officiate in civilian league playoffs, from minor hockey to University Sports, in every province where he was posted. In addition to his on-ice career, Maj (Retd) Stakes was also instrumental in the training and development of countless military and civilian hockey officials over the past 15 years. He was a CAF hockey course instructor, served as the CAF Men’s Hockey Chief Official and supervised officials for multiple provincial hockey associations where he assisted many officials to improve their abilities.

Special thanks goes to Chief Warrant Officer Eric Bouffard, who went above and beyond to get me a last minute invitation to the event. Eric was also a fellow instructor at the school and is one of the classiest men I have ever known. He currently works in Ottawa and served as the past Canadian Armed Forces Chief Official for Women’s Hockey. Hearing that I would be in Ottawa to work two Senators games with the night off coinciding with the awards banquet, Eric set the wheels in motion to arrange for me to be in attendance at this prestigious event. Even though I had met Ron and Julie for lunch that very same day, Eric was able to keep it a secret and when he and I walked in to the museum, the look of surprise on Ron and Julie’s face was priceless!

Several of Ron’s fellow officials from the CF were also in attendance, and it was great to catch up with some that I had met years earlier at the school. Master Warrant Office Andy Tullford, Chief Petty Officer 2nd Class Yves Ouellet, Chief Warrant Officer John Hall,  and Warrant Officer Greg Arseneault were there to enjoy the evening’s celebrations. All of these gentlemen not only officiate, but also serve as Chief Official’s for various military hockey leagues. They truly are a committed and dedicated group of individuals.

I was honoured to also meet Chief Petty Officer 2nd Class Lyne Laurendau who was awarded the 2016 Official of the Year for the Vice Chief of Defence Staff Group. She had an outstanding season and was not only recognized for her on-ice efforts, but also her involvement off the ice as a supervisor, hockey coach and a volunteer organizer for the Canadian Joint Operations Command Hockey Tournament. Congratulations Lyne for receiving this award and my very best wishes for continued success in your officiating. 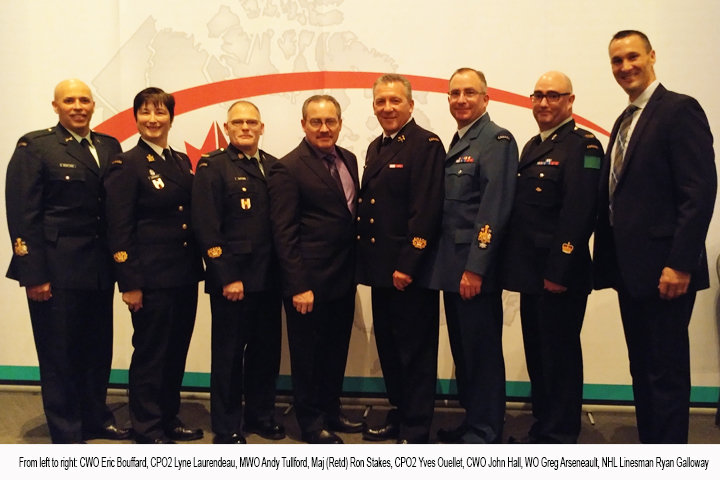 Ron, on behalf of the entire NHLOA, congratulations on this incredible award in recognition of your commitment and efforts towards hockey. Thank you for your selfless dedication to the craft of officiating and to your efforts in making future officials excel through your guidance. Most importantly though, our sincere thanks to you and every other member of the Canadian Forces for your sacrifices to make Canada safe and free. Enjoy your retirement!!