On October 8th, 2022 in Winnipeg, Manitoba, Canada, NHL Off-Ice Official and long-standing Crew Supervisor of Off-Ice Officials, Ron Ottawa, was inducted into the Manitoba Hockey Hall of Fame. He becomes the 26th member of the MHHOF Officials Category, and joins an esteemed group featuring many of the most recognized officials to come from Manitoba. Included in the category are retired NHLOA Alumni Rob Martell (2017), Andy Van Hellemond (1992), as well as two current members of the NHL Off-Ice crew in Winnipeg, Rob Haithwaite (2019) and Ian Heather (Builder Category – 2013).

Born in Winnipeg, Ron participated as a player at several of the outdoor rinks around the city. In 1966, at the age of 18, he saw an advertisement at the Winnipeg Arena for a referee clinic. This chance happening led to a remarkable 56 year officiating career, where once again he honed his skills, this time as an official, working all levels of youth hockey at outdoor city rinks.

In 1986, Ron retired from his role as an on-ice official, but that didn’t end his extensive involvement. He became a member of the off-ice officiating crew for the first incarnation of the Winnipeg Jets. Then in 2011, when the new Jets came to the city, Ron was selected as the Crew Supervisor, the position he currently holds today. Due to his diligence, attention to detail, and tremendous leadership skills, he was selected as the Crew Supervisor for the NHL’s 2018 Global Series in Finland.

Professionally, Ron was a teacher and school admistrator. His expertise and teaching skills have been of great benefit to many officials and he has never forgotten how important the role of mentor and coach is to the Officiating Program in the province. He played key leadership and Chairperson roles in the education and mentorship of young officials in Manitoba. As a result of his continued involvement in the development program, he was the recipient of a Hockey Canada Award in 2011.

Ron’s family was instrumental in allowing him to follow his passion. Ron’s wife Chris, as well as his daughters Kristen and Lauren and their families have been incredibly supportive, especially considering the immense time commitment there is in his various roles, both with the NHL and Hockey Manitoba.

On behalf of every member of the National Hockey League Officials Association, we would like to congratulate Ron on this remarkable and very worthy induction into the Manitoba Hockey Hall of Fame for 2022 in the Officials Category. We are extremely proud to work with you and sincerely appreciate the professionalism that you bring to the games in Winnipeg. 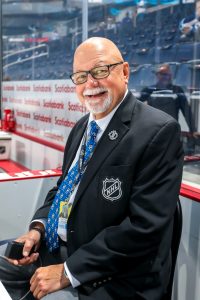 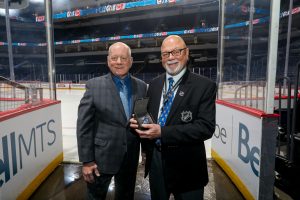 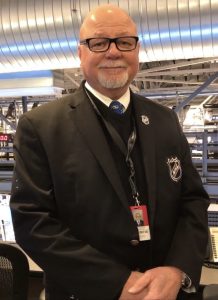