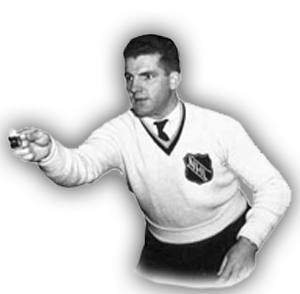 The first legendary official from the United States, Bill “The Big Whistle” Chadwick began his love for the game as a player in his youth. However, in 1935 as a 19-year old trying out for the US national team, his playing days ended. He literally put his skates on the ice for the first practice when he was hit by a stray shot in the eye. Blinded, he tried playing the next year, but an accident above his good eye scared him into retiring. Shortly thereafter, though, Tommy Lockhart, president of the Eastern League, called him and asked him to officiate that night because the scheduled zebra had taken ill. Two years later, at age 24, Chadwick was in the NHL, where he stayed until 1955.

Chadwick was the man who invented hand signals to make plain to all fans why he was blowing the whistle. For a holding penalty, he grabbed his wrist, for slashing he hacked his forearm, for tripping he cut his hand against his knee, etc. Fans and players alike loved the clarity of the signals. Throughout his career, he never told a soul of his blindness, and he got a small personal kick every time a player called him blind! He refereed in every playoffs from 1939 to ’55, and by the time he retired was the leader in games with over 1,000.

Chadwick was inducted into the Hockey Hall of Fame in 1964. After retiring, he became vice-president of a major business in New York, and he was an ardent Rangers season ticket holder, but his passion lay more in taking an active role in the game. When he was asked to do radio work for the Rangers in 1965, he accepted, and it was during this time he was given the nickname “the Big Whistle.” He remained with the club for twenty years as a commentator, known as much for his impartiality on radio as he had been on ice. He retired to private life in 1987.