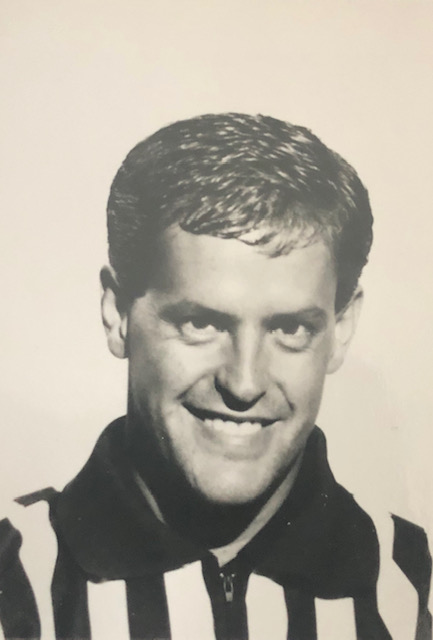 On the streets or inside an ice arena, excitement and drama seem to follow Don Adam, a genuine Front Range-raised cop.
The hockey referee and Louisville police officer is one of the state’s most versatile law-enforcement officers, often conducting his business in a heated college game between rivals or a civil dispute in the small city east of Boulder.

The one-time NHL referee has been a police officer for nine years and is approaching his 24th year with the Denver-based Western Collegiate Hockey Association. He is no stranger to the intense University of Denver-Colorado College rivalry, and he wore the orange referee stripes during the 1992 and 1998 Winter Olympics, five world championships and the 1993 NHL preseason.

He was the first NHL video replay official at Avalanche games, which he did from 1995 until the league began to rule on all its replays from its home office in Toronto at the start of the 2003-04 season.

“In hockey, we work from the rule book, and as a cop we work from the Colorado Revised Statutes, but to interpret those things in the two respective jobs, there’s a lot of similarities,” Adam said from his patrol car. “Both professions require a lot of quick decisions in pressure-filled situations. Experience, judgment and common sense are a huge part in how you apply it all.”

Denver-area linesman Tim Swiader has been working under Adam for more than 20 years. Swiader recalls a popular YouTube video of Adam being miked up during a game between Alaska Anchorage and Wisconsin in Madison, Wis., about 10 years ago. Adam was questioned by the scorer’s table about the penalties he had just called, and instead of explaining the obvious — which he doesn’t have to do — Adam quipped, “I just make up (expletive) as I go.”

“That was just Donnie being lighthearted in a tight situation,” Swiader said. “Even in the toughest situations, Donnie doesn’t get wrapped up in the moment. He maintains his composure.”

Realistically, Adam said he could call a penalty on every shift and pull over a driver every minute.

“It’s the interpretation of the rule book or the law that prevents me from doing that,” Adam said. “It’s knowing how to appropriately and fairly interpret the laws.”

Many of Adam’s best hockey stories are fair game to share. An angry fan threw a cowboy boot at him in Texas during a USA-Russia pre-Olympic tour game 1992. He lost 13 pounds during Colorado College’s 1-0 triple-overtime playoff game victory over Wisconsin at the Air Force Academy in 1997.

He’s the world’s only NHL linesman to know how it feels to wear Peter Forsberg’s skates — and drop the puck beside the former Avalanche center while wearing them during a game.

Adam borrowed a pair of Forsberg’s skates in 1999, serving as a substitute linesman in a game against Calgary. Adam was asked to come down from the video booth to replace injured linesman Thor Nelson — who absorbed a slap shot to the spine by Adam Foote — during the first intermission.

“An Avs assistant equipment manager got me some long underwear and a pair of skates my size, and said: ‘These should work. They’re a pair of Forsberg’s skates,’ ” Adam said. “The funniest part was, when I got out there early in the second period, I immediately had a faceoff in my end, and Forsberg took the draw.”

Adam, 47, was born in Westminster and played youth hockey for DU, Hyland Hills, Arvada and Littleton. He turned to officiating in his early 20s after being cut twice in junior-A tryouts.

“Don was good right from the get-go,” said Air Force coach Frank Serratore, who held the same position at DU from 1990-94. “He’s sure of himself, confident and he looks you right in the eye. I like guys like that. When he makes a call, he’s decisive — he just had a really good feel for officiating right from the get-go.”

Adam and Serratore met in 1984 in Rochester, Minn., where Adam unsuccessfully tried out for Serratore’s Austin (Minn.) Mavericks of the United States Hockey League.

“I showed him what his calling was,” Serratore joked. “If it weren’t for me, he would have gone down in history as being a bad player instead of a great ref. It was the best call he ever made.”

Adam has worked in virtually every North American hockey league, from juniors to the pros. His dream was to be an NHL referee, but that ended almost as soon as it began. After he signed a contract with the NHL for the 1993-94 season, Adam’s girlfriend was involved in a near-fatal car accident, and he took time off to be with her just before the NHL officials went on strike. He never got another chance.

“It was pretty depressing, and I contemplated quitting officiating altogether, but then I embraced the fact there were other opportunities, and the next year (1994-95) the IHL came to town with the (Denver) Grizzlies,” Adam said.

Adam also worked in the Canadian Hockey League’s major-junior system — the Western, Ontario and Quebec leagues — and was the director of officiating for Roller Hockey International and the West Coast Hockey League, both now defunct.

“I’ve wanted to be a cop since I was 17 or 18 years old,” Adam said. “At the time, my girlfriend’s dad was a cop and I really looked up to him, but that was when my hockey career started taking off, so I pursued the hockey for a number of years before coming back to this profession.”

Adam’s officiating career by the numbers

Louisville police officer Don Adam has an impressive résumé as an official in ice hockey:

21 Years as a Western Collegiate Hockey Association referee (plus two as a linesman).

27 His age while working at the 1992 Olympics (he was the youngest official there).