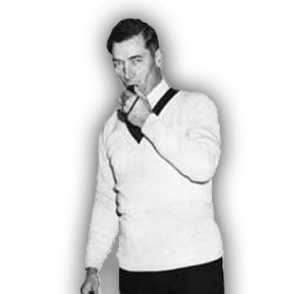 As a boy, Fred “Mickey” Ion participated in sports like any other boy his age, playing goal in hockey and forward in lacrosse. He wound up moving to Brantford and then down to Toronto where he turned pro with the Tecumsehs, the best lacrosse outfit around. He was drafted by Vancouver in 1910, and the year after that his team won the prestigious Minto Cup. When the Patricks started the Pacific Coast League the next year, they had some of their lacrosse players act as officials for their hockey league. Ion was one such two-timer, and so began a life in refereeing that lasted almost three decades.

Ion came East to the NHL when the PCHL folded, and it was in the NHL that he became top referee for so many years. Among his proteges was a young King Clancy, and Ion’s advice was simple: “Once the puck drops,” he said to King, “you and I are the only two sane men left in the rink.”

“The Mick” was well-known for impeccable impartiality, yet through all his dealings with the most skilled and physical men in sport the person who gave him the most grief during his career was his mother, who would save clippings of games he worked and chastise him for his behaviour when she thought it inappropriate. He also earned the nickname “Iron Man of Hockey” for his ability to work four or five games a week in different cities throughout the country.

After retiring as a skater, Ion became the NHL’s referee-in-chief until 1942, when he retired to Seattle, where his wife had grown up. But later in life the worst tragedy for a man who lived so long on skates befell Ion. In 1957 he contracted phlebitis, and doctors were forced to amputate his left leg. Three years later, the right leg incurred the same virulent disease, and a man so very active all his life was now, tragically, rendered legless.

Ion was inducted into the Hockey Hall of Fame in 1961, delighted and honoured to be remembered in the same breath as hockey’s greatest players.