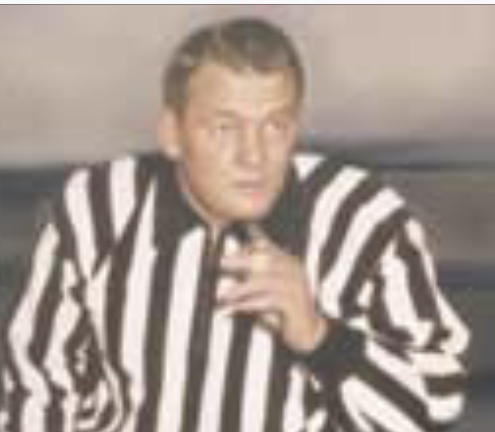 Raised in Kitchener, Frank Udvari was a better baseball player than hockeyist as a boy, but from a young age he discovered that his calling was as a referee. He was coaching a juvenile team in his hometown in 1948, and when the referee failed to show for a game he took the whistle and guided the teams, one of which was his own, in a fair contest. Three years of OHA work later, he was in the NHL.

Udvari began in the pros in 1951, refereeing a dozen games and slowly apprenticing in the American league. However, early in his second season he had to fill the breach when Georges Gravel underwent a gallstone operation and was lost for the season. The year though, did not have a happy ending. Udvari was given many tough assignments, and games often got out of hand or were controversial. But his colleagues and Clarence Campbell stood by him. Within two or three years Udvari was considered among the finest referees the league had ever seen.

Udvari retired in 1966 having missed only two games, on a weekend when both his wife and father became ill. He became supervisor of NHL officials on August 1, 1966, conducting many hockey schools across the continent and later serving as the referee-in-chief of the AHL for many years.

Additionally, Udvari passed his Ontario Government Insurance Board test with outstanding marks and sold insurance during and after his officiating career. He owned a golf course and other real estate, but his final achievement in sport came on December 30, 1978. Retired for a dozen years, he was acting as NHL supervisor at an Islanders-Atlanta Flames game when referee Dave Newell suffered a serious cut to his jaw early in the game. Udvari donned the striped sweater and borrowed a pair of skates from Bryan Trottier and went to work. Though he called only two minor penalties, his most important call of the night came when he disallowed a goal…scored by Trottier!

Udvari was inducted into the Hockey Hall of Fame in 1973.