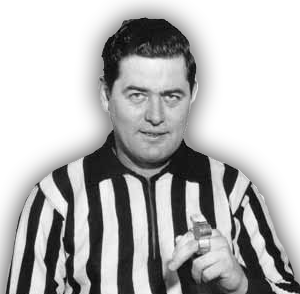 Controversial, colourful, proud, and competitive, George Hayes relished hockey with his every breath until one day in 1965 when his career was taken from him by NHL president Clarence Campbell. Hayes had been a first-class athlete growing up but moved into officiating early on in life, refereeing minor league tripleheaders for a dollar a game and graduating to the OHA in 1941 and the American League five years later.

His tenure in the AHL ended with the war, as returning officials reclaimed their jobs and forced Hayes back to the OHA for another two years, including the 1946 Memorial Cup. NHL president Red Dutton signed him to an NHL contract on April 15, 1946, as a referee, but after a year and a half he became a linesman, a position he held with distinction for the next twenty years.

Hayes’s time in the league was both rewarding and frustrating. He was a fluid skater, the largest man on the ice, and full of good humour. He was the first official to hand deliver the puck to his colleagues rather than throw or slide the puck as was habit. He was also famous for his scrapbooks, keeping game reports for every contest he worked, an extensive collection which made its way to the Hockey Hall of Fame after he retired.

But Hayes was also a rebel who didn’t mind causing trouble, and he was noted for extended bouts of drinking after a game. He was once fined by the league for not shaving, and was suspended once for travelling coach and billing the NHL for first class. Hayes was the first official to work one thousand games, and in 1959 was part of the crew that traveled with the Rangers and Bruins on a tour through Europe. In 1965, President Campbell ordered all officials to take eye tests, and when Hayes refused Campbell suspended him indefinitely for “gross insubordination,” a term of unemployment that lasted the rest of his life.

During his skating career he was also the western Ontario scout in the summers for the Cleveland Indians, a team he had fallen in love with as a kid in the Depression ’30s.

Hayes returned to Ingersoll where he wrote a column for the Woodstock Daily Sentinel three times a week while maintaining a small farm. During his lifetime he was nominated for induction into the Hall of Fame as many as seven times, but it wasn’t until a few short weeks after his death that he was finally admitted.