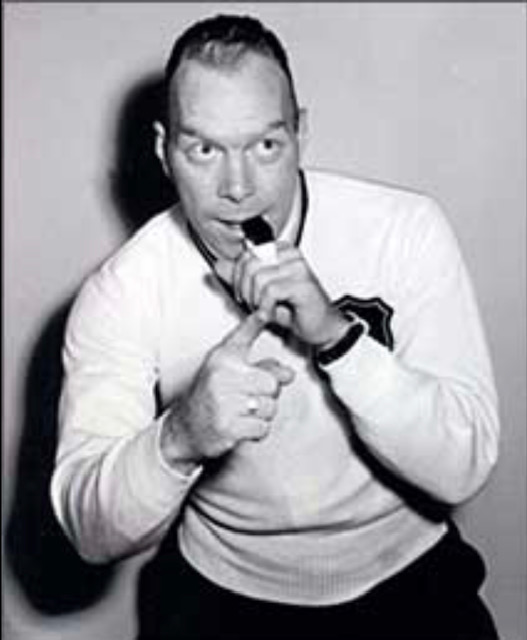 Like every other official, Red Storey was an active and skilled kid athlete who simply didn’t have the extraordinary skills to turn pro in a given sport. In Storey’s case, though, his cross- training came in handy. He played baseball, football, lacrosse, and hockey in his youth, but it was with the pigskin that he excelled. At the ripe old age of 18, he turned pro with the Toronto Argonauts, winning the Grey Cup in 1937 and ’38. In the 1938 game, he produced one of the greatest performances on the Canadian football field, coming off the bench in the final quarter to score three touchdowns and scamper 102 yards to set up a fourth in a 30-7 come-from-behind win over Winnipeg.

Storey had been scouted by the Chicago Bears and New York Giants, but all thoughts football came to an end in 1941 when he suffered an horrendous knee injury that ended his playing days. He continued to play a little lacrosse and baseball, but hockey captured his heart. In 1942-43 he played for the Montreal Royals but began a career as a football official, a position he maintained until 1957.

Storey’s love for the whistle turned from the field to the rink, and in 1950 he was hired by the NHL. He was quickly regarded as one of the game’s finest, a colourful but fair adjudicator of the world’s fastest sport who was liked by the players but who in turn believed him to be supremely fair. All that changed the night of April 8, 1959, though. In a Montreal-Chicago playoff game at the Stadium, the hostile crowd threw debris, chairs, carrots, and all sundry objects onto the ice in disgust over what fans felt were a string of important non-calls of Canadiens’ infractions. The day after, NHL president Clarence Campbell conceded that Storey had “choked” and the referee was stunned by the criticism. He resigned the next day.

Although Storey never returned as a ref, despite pleas from, among others, Conn Smythe, he remained active in the game for many years, doing radio and TV work, playing old-timers’ games and providing light-hearted commentary on games and players. He was inducted into the Hockey Hall of Fame in 1967.