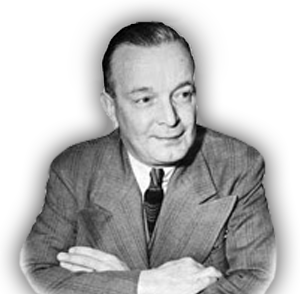 A man’s life in hockey sometimes cannot be measured merely in terms of player or official or builder. Bobby Hewiston was just such a man, a man who devoted himself to the game but whose devotion took on so many different forms to call him by just one would not be fair.

Hewitson attended Jesse Ketchum School in Toronto, noteworthy for so many great athletes produced by the city. He played lacrosse and football and won championships in both sports in 1913. Within a few years his playing career gave way to a career as a referee, in hockey, lacrosse, and football. He worked by day as sports editor for the Evening Telegram, a job he maintained until 1957, and at night he tooted his whistle on the field and in the arena.

By 1920, Hewitson was the most respected referee in the NHL. Known alternately as “the Little Guy” or the “Pony Referee” for obvious reasons–he was 5’4″ 125 lbs.–he was also fearless and aggressive, happy to sort out a fray between players twice his size. He held the whistle the night of November 12, 1931, the opening of Maple Leaf Gardens, and retired as an official in 1934, but he joined the famous Hot Stove Lounge on radio during intermissions of Foster Hewitt’s Maple Leafs broadcasts where he remained for many years.

Overlapping these vocations, Hewitson also became secretary of the Canadian Rugby Union in 1922, a position he held for a quarter of a century. When he retired from most of his lifelong ventures in 1957 he became curator of the Sports Hall of Fame and shortly after added curator for the Hockey Hall of Fame to his portfolio. He was himself inducted into the Hockey Hall of Fame in 1963, and helped establish the Ontario Sportswriters and Sportscasters Association and the annual Sports Celebrity Dinner (which later became known as the Conn Smythe Sports Celebrity Dinner) and retired from all these later-life endeavours in 1967.